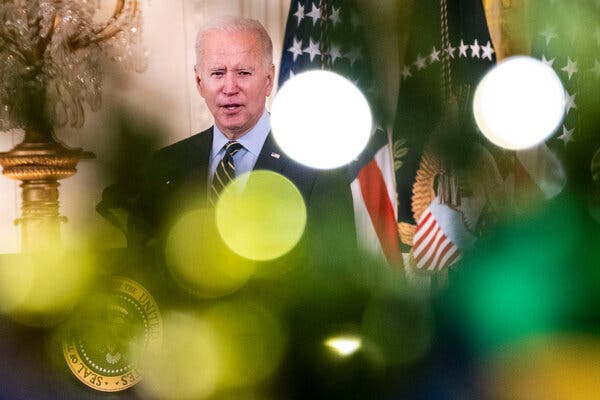 President Biden spoke with President Vladimir Putin of Russia via video chat and warned him that there would be economic consequences if he continued to increase Russia’s troop presence around Ukraine, according to the White House.

The meeting came at a high-stakes moment as tens of thousands of Russian troops have gathered along the Ukrainian border, raising fears of an invasion. Biden has tasked himself with protecting Ukraine, a democratic ally whose security U.S. officials have promised to defend.

“I will look you in the eye and tell you as President Biden looked President Putin in the eye and told him today that things we did not do in 2014, we are prepared to do now,” Sullivan said. In 2014, Russia annexed Ukraine’s Crimean Peninsula.

On the ground: Ukrainian soldiers have seen little evidence of escalation, but after eight years in the trenches, they wearily anticipate that the Russian military will come sooner or later.

Related: U.S. officials told Congress that Germany had agreed to shut down its gas pipeline that runs through Russia if Putin’s troops invade Ukraine, according to Reuters.

Amid rising fears of the Omicron coronavirus variant and criticism of Western vaccine hoarding, the U.S. announced a plan to spend $400 million to deliver vaccines globally and help “overcome vaccine access barriers.”

The proposed spending is an important step, public health experts said, for both poor countries and wealthy countries. The longer the virus circulates across the world, the more dangerous its variants can become.

Three-quarters of the money will go toward administering vaccines in remote territories and helping countries with vaccine policies and supply chain logistics, officials said. The rest will be used to target surges in cases and to help countries manufacture vaccines locally.

The new program comes amid criticism that Covax, the U.N.-backed multibillion-dollar alliance, has not met its goal to acquire doses for poor countries after months of missteps and disappointments.

In other virus developments:

A vigil for Jamal Khashoggi in front of the Saudi Embassy in Washington in 2019.Credit…Sarah Silbiger/Reuters

An arrest connected to the Khashoggi killing

The French police arrested a Saudi man thought to be involved in the assassination of the dissident writer Jamal Khashoggi in 2018, but the authorities warned that they were still verifying his identity.

The man, Khalid Alotaibi, 33, was arrested at the Roissy-Charles de Gaulle airport north of Paris just before he was to board a flight for Riyadh, Saudi Arabia. Turkey had issued an international arrest warrant because a man by that name is accused of being a member of the team that killed Khashoggi inside the Saudi Consulate in Istanbul in 2018.

A Saudi official said the arrest was a case of mistaken identity.

The Turkish trial of the Khashoggi killing has moved slowly, primarily because Saudi Arabia has refused to hand over any of the accused. Alotaibi, who would probably be extradited to Turkey if his identity was confirmed, would be the first of the murder suspects to be tried in person outside Saudi Arabia.

Context: In February, President Biden allowed the release of a report that concluded that Crown Prince Mohammed bin Salman of Saudi Arabia had approved the plan to capture or kill Khashoggi. The Saudis have insisted that it was a rogue operation.

A man sold vegetables at a market in Colombo, Sri Lanka, in October.Credit…Allison Joyce/Getty Images

The assault of a French soccer player in a Paris suburb lasted only a minute.Credit…James Hill for The New York Times

The assault of a top women’s soccer player in France made headlines, with masked men, a metal bar, and a teammate arrested. But as details emerge — about marital infidelity; about accusations implicating other members of the team; about reports of menacing phone calls to players disparaging the victim before she was attacked — the truth is elusive.

The Times’s chief film critics, A.O. Scott and Manohla Dargis, put together their picks — films that, in the words of Scott, “reward your attention, engage your feelings and respect your intelligence.” Here’s a selection.

“Summer of Soul,” a music documentary by Questlove, features footage from a series of open-air concerts in Harlem in 1969 along with interviews with musicians and audience members. It’s “a shot of pure joy,” Scott writes.

With “West Side Story,” Steven Spielberg and Tony Kushner — and an energetic young cast of Jets and Sharks — pulled off a surprising cinematic coup. “Respecting the artistry and good intentions of the original stage musical, they turned it into something urgent, modern and exciting,” Scott writes.

Andouille sausage, white beans and collard greens are not typically used in pasta, but this dish may become part of your regular rotation.

“The Anomaly,” by Hervé Le Tellier, about the mysterious fate of a flight from Paris to New York, marries high entertainment with serious literature.

How many hours of sleep do we need? Not too much, not too little.

The latest episode of “The Daily” is about prosecuting school shootings.

Natasha Frost wrote the Arts and Ideas. You can reach Matthew and the team at briefing@nytimes.com.

Trudeau Wins, but Is Diminished by a Futile Election

Australia will allow some visa holders to return in December.