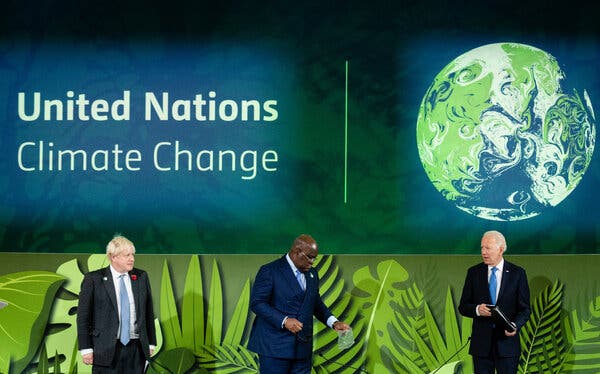 National leaders at the COP26 climate summit agreed on two significant advances on climate change: promises to curb methane emissions and a deal to end deforestation by 2030.

But progress still fell well short of the big prize: securing aggressive commitments to reach net-zero carbon emissions globally, to slow the rising temperatures that have led to lethal fires, floods, droughts and heat waves around the world.

Methane, a potent greenhouse gas, can warm the atmosphere 80 times as fast as carbon dioxide in the short term. More than 90 countries agreed to limit it. Russia and China, despite abstaining from the methane pact, joined Brazil and more than 100 countries in pledging to end deforestation in the coming nine years. The pact encompasses about 85 percent of the world’s forests.

International relations: Biden criticized the efforts of China and Russia, whose leaders did not travel to the summit. “I think it’s been a big mistake for China” not to show up at the conference, he said. “They’ve lost their ability to influence people around the world, and people here at COP.”

Ethiopia calls on citizens to defend the capital

The Ethiopian government declared a state of emergency yesterday and called on its citizens to pick up arms and prepare to defend the capital, Addis Ababa, as rebel forces from the northern region of Tigray pressed south toward the city following the capture of two key towns.

The Tigrayans, who have been fighting the government for the past year, have joined forces with another rebel group. The Ethiopian military suffered a major defeat when it was forced to withdraw from Tigray in June. Now the war is rapidly moving toward the capital.

Under the state of emergency, Abiy Ahmed, the Ethiopian leader, has sweeping powers to arrest and detain critics, impose curfews and restrict the news media. Any Ethiopian over 18 could be called into the fight, the justice minister said.

What’s next: Jeffrey Feltman, the Biden administration’s envoy to the Horn of Africa, said the deepening conflict could have “disastrous consequences” for Ethiopia’s unity and its ties to the U.S.

From left, Noelle Verbeeken, Lea Tavares Mujinga and Simone Ngalula, three of the women who are suing Belgium for crimes against humanity.Credit…Ksenia Kuleshova for The New York Times

Belgium has apologized for the kidnapping and deportation of thousands of mixed-race children born under its colonial rule of a vast territory in Africa that now includes Burundi, the Democratic Republic of Congo and Rwanda. Now, five survivors are seeking reparations.

The victims, the children of African mothers and European fathers, were sent to religious schools hundreds of miles from home, grew up in poverty and suffered from malnutrition and physical abuse. Now women in their 70s, their stories were recounted by lawyers on a recent morning in a small courtroom in Brussels packed with spectators.

The plaintiffs are each seeking compensation of 50,000 euros, about $55,000, and are suing the Belgian state for crimes against humanity for the segregationist policy that stripped them from their mothers — a system that endured from the end of the 19th century to Congo’s independence in 1960 and even after. A verdict is expected this month.

Background: Unions between African women and European men were forbidden under Belgian rule in Congo, and the authorities went to drastic lengths to ensure the primacy of white people.

Quotable: “For our shared history, a crime must lead to reparations,” said the granddaughter of one of the plaintiffs. “It’s just fundamental.”

As earth warms and glaciers melt away, long-frozen artifacts and animals are being revealed to archaeologists. But the window for study is slender, and shrinking.

Cultural institutions have been trying to lure audiences back with shorter shows. Not the Metropolitan Opera.

“There’s always room for epics,” Peter Gelb, the Met’s general manager, told The Times. “There is always an appeal for huge events.”

For now, the audience has been slow to turn out. On opening night last week, a little more than half of the auditorium’s 3,700 seats were filled. On Saturday, about two-thirds of the seats were full.

In “1000 Years of Joys and Sorrows,” the Chinese artist Ai Weiwei writes about family, exile and the inseparable nature of art and politics.

In a rising tide of animated series for adults, here are three cartoons worth catching.

P.S. A hidden haiku from a Times editor reflecting on his 20s: “Things happened for a / reason, preparing me for / the life I would lead.”

The latest episode of “The Daily” is about inflation in the U.S.

Claire Moses wrote today’s Arts and Ideas. You can reach Natasha and the team at briefing@nytimes.com.

Queen Elizabeth to Miss Remembrance Service Because of Sprained Back

Omicron Variant, in at Least 20 Nations, Spread Earlier Than Was Known